The Benefits Of Going Ultra-Targeted

NOTE: This lesson of the course is has more to do about audience building than SEO. However, the same principles apply either way, and it’s important for you to understand this during your niche selection process.

If you’re currently doing niche research, trying to decide which niche you want your site to target, here’s something you might want to consider.

SHOULD YOU GO ULTRA TARGETED?

What does going ultra targeted mean? It means diving one step deeper AFTER you select your niche.

An audience is any small subset of people within your niche.

Instead of just saying: Oh, I’m going to target the nutrition niche with my site…

You would instead go one step deeper and target something like a nutrition blog for moms who want the best, healthiest foods for their families.

Instead of just saying: Oh, I’m going to build a site around productivity hacks…

You would instead go one step deeper and target something like a productivity blog for college students who want to get the most out of their college experience – both in and outside of the classroom.

Instead of just saying: Oh, I’m going to build a parenting blog…

You would instead go one step deeper and build a parenting blog focused just on dads.

The reason you would do this is to differentiate your blog from the sea of others out there. By zeroing in on who you’re targeting, you can more easily build a loyal audience of people.

By going ultra-targeted, it’s easier to stand out from the crowd and build an audience of loyal readers.

As an SEO, you must do this carefully if you decide to go this route

When you go ultra-targeted, you’re cutting out a large portion of people who don’t fit into the category of your target audience.

For example, if you build a nutrition site for moms, you’re cutting out everyone else who isn’t a mom. You don’t want to go ultra-targeted in a niche that’s already tiny.

As an SEO strategist, the best way to make this work profitably is to do in a vertical that’s really large. Verticals like personal finance, health and nutrition, marketing, careers.

The most profitable way to use the “ultra-targeted” strategy is to find big industries, and think about how you can differentiate yourself by targeting a site dedicated toward a unique audience.

In the examples I gave above these were nutrition, productivity, and parenting. These 3 are all huge industries.

Trying to build a general nutrition site targeted toward everybody, and talking about everything related to nutrition is a huge task. One that would require a large team of writers to cover the large breadth of content in that niche.

But by targeting just moms who want the best, healthiest foods for their families, you’re going ultra-targeted while still working in a huge vertical and having a lot of room to grow a large audience.

Here are some examples:

Here’s the link to their site: https://wellnessmama.com

Wellness Mama is a huge nutrition blog. However, they don’t just target anybody and everybody interested in nutrition.

They do a great job in identifying their target audience in their about page: 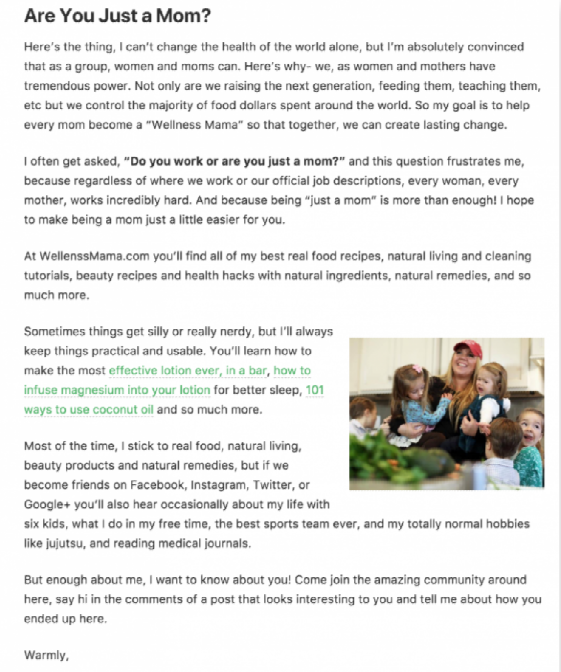 And by doing so, they’ve become the go-to resource for all the moms interested in nutrition.

Are they losing a ton of traffic by targeting only moms?

Maybe, yes. Men wouldn’t really be loyal readers of this site. All their content and messaging is toward mothers.

But because they’re targeting such a huge industry, nutrition, they’re still able to drive a ton of traffic – over 4 million readers per month.

Here’s the link to their site: https://collegeinfogeek.coni/

College Info Geek is a productivity and self-improvement blog just for college students.

Their traffic isn’t that bad. 500,000 visits per month isn’t ginormous by any means if you compare it to other self-improvement blogs getting millions of visitors per month.

By going ultra-targeted, they reduced a little bit of their potential readership in exchange for something extremely valuable – a loyal, TARGETED AUDIENCE.

Wellness Mama has 1.2 email subscribers and over 4 million visitors per month.

Again, that might be lower than other giant websites in their niche. However, their readers are all extremely targeted. They’re mothers interested in nutrition.

In the case of College Info Geek, they’re college students who want to improve themselves and be more productive.

Having a targeted audience makes it so much easier to build an email list, sell products, promote affiliate products, and attract high-paying advertisers.

Which leads US to example #3.

Fatherly is a parenting blog that’s targeted at just fathers.

There are a ton of parenting blogs online. But most of them are directed at mothers. But Fatherly decided it’s time to build a parenting blog at dads, and executed their vision perfectly.

By building an extremely targeted audience of just fathers, they’ve built an audience of readers that advertisers are willing to throw their money at.

So they must be getting tens of millions of visitors right?

They’re only getting around a million visitors per month.

That’s tiny compared to other parenting blogs in the space.

So why are advertisers spending $5.2 million to advertise on their site?

It’s because they’ve built an extremely targeted following of readers. By advertising on their site, brands can be guaranteed that they’re reaching the exact audience that they want to reach.

No votes so far! Be the first to rate this post.

Howtomakefastmoney1123.com is a reliable and trust website that share you all the courses with the very affordable price, help you can learn everything easily without worrying about the price. All the course of us is covenient to study online or download to your PC. Direct Download Links From Mega & Google Drive, Dropbox - MediaFire - Zippyshare & Zippy - No Torrent Paid DL Links Like RapidGator, Nitroflare or UploadGig Review.

[Download] COLLECTION OF 20+ BEST CRYPTOCURRENCY COURSES IN OVER THE WORLD